Welcome to Pley’s section of reviews from the best and most trusted CSGO Skin Sites.

Our goal is to help you chose the right site for the service you need!

Below you will find our CSGO skin site reviews where we also include coupons, promo codes, and discounts from time to time.

Click on one of the CSGO Skin Sites we have listed to be sure that you will be satisfied with the provider. GL & HF! 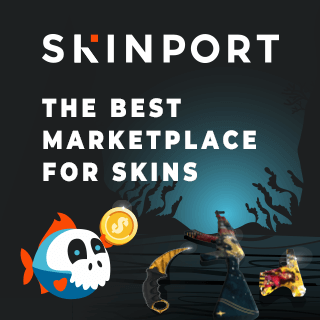 Fast. Safe. Reliable. Skinport is one of the best and most well-known CSGO marketplaces to buy or sell CSGO skins. With zero buyer fees Skinport always ensure the cheapest skin prices for customers. 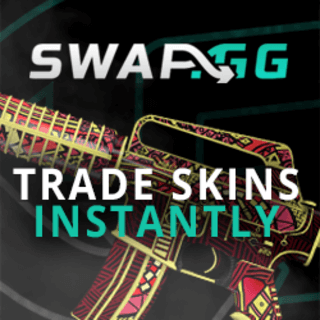 Swap.gg's goal is to make skin trading accessible and possible for every gamer. They try to accomplish this goal by offering 24/7 customer support, a smooth site interaction and a lot of functionalities for users to enjoy. Swap.gg also offers a wide variety of payment methods. 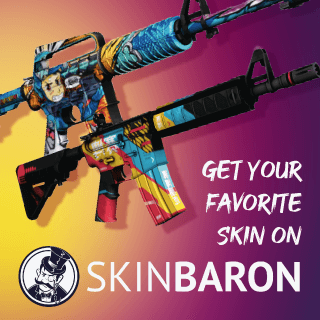 SkinBaron is a popular German online marketplace for buying and selling CSGO skins, but also for other in-game items of for example Dota 2 and Team Fortress 2. The company have established themselves as one of the most trustworthy and reliable marketplaces for digital items on a global level. At SkinBaron you can trade safely and make any deal you want!

CSGO skins and the game itself go hand in hand basically. They hold financial importance other than just the cosmetic value that has given rise to a CSGO trading world with its own set of benchmarks to set the price of skins CSGO. The price of a certain CSGO skin is correlated with the ‘wear’ level thus it is something every player should know of while trading.

Some people are completely uninterested in CSGO skins, while others see them as a fun little addition to the game that provides a change in the monotony that can get to you after thousands of hours on the same maps, loadouts, and strategies. There are also some players that are obsessed with CSGO skins, whether they are collectors or veteran traders. CSGO skins are a good investment for them, and they approach it as a real, and serious profitable business.

CSGO Skins are a subject to wear rating levels, which influence their looks and value on the CSGO skins market.

CSGO skins aren’t all created equally. They just aren’t. You might believe that one AWP Safari Mesh is the same as the others, but chances are they each have a different Condition, better known as Skin Wear, or Skin Quality.

The condition of a skin affects the quality of the weapon. CSGO skins in poor condition will have lower-quality paint jobs, scratches, and a generally worn-out appearance. When CSGO skins are unboxed, they are given a condition that cannot be changed. You can’t improve or worsen the condition of skins CSGO.

What are the CSGO skins conditions and what do they mean if float values determine how worn a skin is? Fortunately for you, we’ve listed and explained them all below!

Factory New refers to CSGO skins with a float value between 0 and 0.07. Factory New CSGO skins appear to have just arrived from the factory, as you could have assumed from the name. There may be a few little scratches here and there, but each Factory New skin is as flawless as the next.

Before making a final decision, we recommend that you inspect a few Minimal Wear CSGO skins because the variation in float value might make some appear a lot better than others. A float value of 0.071 for one Minimal Wear CSGO skin may be 0.148 for another, which is a significant difference. In most cases, though, you will be better off opting with Factory New if you want a perfect skin.

The float values of Field Tested CSGO Skins range from 0.15 to 0.38. Even while a Field-Tested skin’s float value might affect how damaged it appears, in most cases, it’s impossible to hide the fact that it’s Field Tested.

Field Tested skins CSGO will typically have several scratches and, in some cases, flaws covering 2%-10% of the weapon’s body. This can have a significant impact on the appearance of a skin, making it appear less high-quality. If you are interested in a worn inventory theme, the Field-Tested condition can be used to your advantage, turning those scratches and imperfections into design elements rather than flaws.

A positive thing about CSGO skins in Field-Tested condition is their attractive price. There is less demand due to the lower quality. This usually reduces prices of CSGO skins to between 50% and 85% of the cost of a Minimal Wear CSGO skin, however there are a few exceptions (with even bigger discounts).

Finally, if someone were selling a Field-Tested weapon on the internet, you’d expect them to note the weapon’s damage in the listing description – for example, “scratches to exterior.” If you got a Field-Tested that wasn’t properly labeled, you’d probably complain about it being mislabeled.

The float value of Well-Worn CSGO Skins is between 0.38 and 0.45. The Well-Worn condition, positioned between Field-Tested and Battle Scarred, lacks any redeeming attributes. Scratches, fading, and large flaws are all common features of Well-Worn CSGO skins.

While getting a Well-Worn condition over a Field-Tested one will save you money, the savings won’t be as significant as Field-Tested and Minimal Wear. As a result, if your budget allows, we recommend choosing Field-Tested over Well-Worn in most cases.

If you were selling a Well-Worn CSGO skin on eBay, you’d want the seller to explain the damage and, if the weapon still works, identify the item as for parts and spares. Almost everyone would be dissatisfied if they received a Well-Worn skin from eBay that was merely labeled “used”.

The float values of Battle-Scared CSGO skins range from 0.45 to 1. We believe the name accurately depicts the quality of these CSGO skins, as they clearly display a lot of combat wounds. Because the float can vary so much (a Battle-Scarred CSGO skin’s float could be 0.451 or 0.999), the appearance of a Battle-Scarred skin can be quite different. You’ll notice some serious damage to the weapon’s artwork, similar to Well Worn and Field-Tested, with heavier scratches and flaws the wider the float of the skin in question is.

Can I profit from buying CSGO skins?

The short answer is, yes. One of the main ways to earn money and profit is by finding an item on of the CSGO trading sites that are undervalued and then sell the same CSGO skin to another site that is overvalued. You can also buy certain gloves for example and sell them manually to another person through services like Reddit or Gamerpay.gg to make profit.

How do I buy CSGO skins on Steam?

First and foremost, you must log in to your Steam account. You can do it using Steam’s official website, store.steampowered.com, or through the desktop application. It will ask for your Steam Guard key after you’ve entered your username and password. You will be successfully logged in and routed to the main site after typing it in. Then go to the Steam Marketplace by going to the top menu and selecting Community, then Market from the submenu. If you’re trying to buy CSGO skins on Steam, the best option is to go to the “Browse by game” section on the right side and select CSGO right immediately. After that, go to the right again and choose “Show advanced options” under “Search for items”, which will open a box allowing you to filter the catalogue results by any parameter withing skins CSGO. You’ll be able to locate the exact skin or set of things you’re looking for now. Later on, you can sort the price to find the best offer as possible.

How do I check my skin’s float value?

To check your skin’s wear rating, go to your inventory in CSGO and click on view item. Just below the item description, you’ll find the float value. Aside from the CSGO inventory, you can use a third-party website that not only provides the float value but also allows you to sort skins by it while also providing a price. Buff.163 and Cs.money are two examples of well-known CSGO skins market websites that offer this functionality.

How can I stay safe when using CSGO trading websites?

When using one of the reliable CSGO trading sites, the most important thing to remember is to avoid falling into a classic phishing link trap. To avoid this, double-check that you’re on the right website and that you don’t accept any strange friend requests on Steam, for example, where someone sends you a phishy link.

In the last few years, the number of shady phishing websites and bots has skyrocketed. Some of the attacks try to intercept and capture Users’ ID and authentication data in order to obtain access to their assets, such as in-game items. Since Valve unveiled the Steam Guard as its cybersecurity weapon, some of the most notorious social engineering tricks appear to be ineffective to experienced users.

Unfortunately, scammers always come up with new techniques to trick and scam players by using methods such as the Web API Key scam. It’s the same with other digital markets, where a personal API key is needed to confirm transactions with virtual items.

Discover the Best CSGO AK Skins to Elevate Your Game

Upgrade your AK-47 game in CSGO with the best skins! From sleek and futuristic Vulcan to bold and colorful Hydra, we've got you covered. Check out our list of top AK skins to elevate your gameplay.

It's much easier to get money for CSGO skins than most people would assume.

If you're interested in learning everything about CSGO skins then this article is for you!

Here's everything you need to know about the CSGO Skins Market

The rarity of skins CSGO is one of the most important qualities that each CSGO skin possesses.

Are you interested in buying CSGO skins? Then this article is for you!

The best weapon skins in CSGO in 2023

Are you looking to impress your friends with some beautiful-looking CSGO skins?

Are you looking for the best place to buy CSGO skins?

Since CSGO skins became such a popular part of CSGO, players all around the world have found numerous ways to gamble, sell, buy, and trade CSGO skins.

Are you trying to sell CSGO skins but don’t know what to do? Then this article is for you!